The Ship Lift Of Niederfinow

The Hohenzollern Canal (now the Oder-Havel-Canal) was built from 1907 to 1914; at the same time, a second decent was already planned in 1905. The decent was made possible at that time - downwards to the Oder and Baltic Sea, upwards in the direction of the Havel and the Elbe - by the use of locks, which were north of the present ship lift. The locks consisted of 4 chambers, which at that time spanned an elevation of 9 m and were designed for ships under 600 t. Each lock required about 2 hours, and that was, especially through the industrial development, too expensive and not very practical. The ship lift was built 55 km north-east of Berlin from 1927 to 1934 in accordance with plans of K. Plarre as a bypass of the locks. Extensive preparation preceeded the construction. The idea was tested with a model which was a fifth of the actual size. The commission was given to several distinguished firms, which were joined together in a common account. For the construction, the removal of 760,000 cubic meter of earth was required; 72,000 cubic meter of concrete and 13,800 tons of steel (St 52 steel for the trough) were used. The construction cost 27.5 million Reichsmark.

The principle of raising and lowering is rather simple. The ship sails into the trough which is sealed to the canal with the help of presses and a special construction of a seal - so tightly, in fact, that the wet lifting chamber becomes part of the canal. At a signal the gates of the trough and of the canal raise at the same time around the ship and the load. The entire event (lifts the ship 36 m) lasts about 20 minutes, including the opening and closing of the gates.

With around 40 maneuvers the day, the wet needle's eye can just barely overcome the lively arrival of traffic on the waterway. The construction of a second lift is therefore alredy being planned. First, however, the old locks will be reconstructed in order to develop a further tourist attraction.

The 10 predecessors of the Niederfinow ship lift:

All predecesors work with water filled troughs hanging from wire-ropes or chains.

in Belgium: The Ronquières inclined plane (with animated picture)

Tours through the shiplift 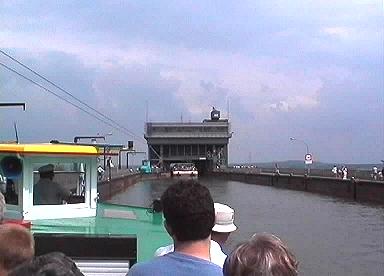